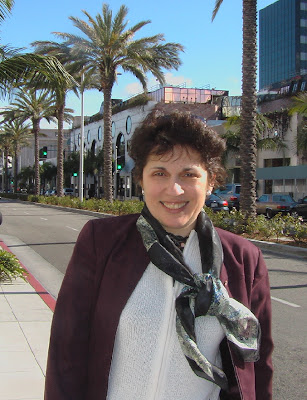 24 FEB Leave London for Los Angeles
As we left Brussels the airport recieved a bomb threat, so after checking, rather than go to the gate we went to the street for an hour. We eventually left an hour late very cold and stressed – to overnight with Paul’s sister.Back to Heathrow at 9am for a Termina1 1 departure for USA – chaos but a little routine "invalid assistance " from BAA made the departure on BA a smooth affair even though we left an hour late due to baggage problems. The flight was quick, due to tailwinds and we arrived in LA on schedule. Again a little routine assistance gave us a smooth arrival. I was so glad for the smooth travel as my back and shoulder were in chronic condition and the prospect of 8 concerts was quite difficult to contemplate.
25 FEB The hotel in LA was Beverly Hills Plaza on Wilshire Boulevard, quite accidentally we had arrived on Oscars weekend but we didn’t try to get close. This my first visit to LA and Beverly Hills simply took my breath away, such beautiful houses with flowers everywhere, with the lawns cut like bowling greens.
26 FEB Los Angeles UCLAOn the Monday morning we went to see Marco Iacobi who heads the Functional MRI research at UCLA. He is a specialist in Mirror Nurones and we discussed the viability of defining a music project to measure the mirror response to music. I am interested in proving with science what is evident from my experience that live performance generates more mirror response than any studio recorded music. I feel that live perfromance has an emotional value that is impossible to create in the studio especially when the editing process breaks the emotional flow.Having not touched my piano for several weeks I was desperate for practice and spent time dashing round Hollywood with a series oif Russian Taxidrivers to get a full 88 key midi keyboard to plug in the computer so that I could take some a physical and mental practice.After four pleasant days the time came for the long haul to Auckland – a thirteen hour flight with BA changing to be operated by Qantas FEB Los Angeles
Posted by Olga B at 02:36